Just a quick disclaimer – there will obviously be a couple (well, a lot) of swears in this post.

A couple of scandals back, Donald Trump caused international outrage by calling some countries ‘shitholes’. Conversely, Labour’s Jonathan Reynolds recently won positive national coverage for telling a holocaust denier he’d rather pick up shit with his hands than continue the conversation, and Jess Phillips MP’s forthright response to a troll has (as of writing this post) not even been deemed newsworthy by mainstream outlets.

Obviously context plays a major role in these examples, but it does beg the question: when is it okay to swear? And can it ever work in your favour as a business? Well, firstly, let’s not conflate the word-slinging above with a carefully planned part of a communications strategy. Plenty of people have some four letter words they’d love to try out on the odd customer, but alas, that type of talk is still generally reserved for the conversations you have in your head while taking a shower.

So instead, here are three lessons from businesses whose messages have crossed into the profane and made it work.

For every person that appreciates unfiltered language from their business partners, there will be others that are immediately put-off. So if you’re going to swear in your content, acknowledge that it will only appeal to a certain demographic.

The rather excellent logo designer Paddy McGrath, who runs superlogoboy.com, uses a sprinkling of risky language to challenge potential clients to tell a compelling brand story.

Paddy’s site is an honest and authentic reflection of both his voice and his design philosophy, and he uses it as a gateway for clients that he knows will be open to his development process. “I’m quite selective about the people I work with”, explains Paddy. “We have to both be excited about working together and my website is a way to set my clients’ expectations from the beginning”.

One of the biggest arguments against swearing in marketing is that it risks drawing attention away from your actual message. Profanity is powerful, but does it genuinely contribute to what you want to achieve?

Dollar Shave Club’s 2012 launch video would have been hilarious on its own, but its title and strapline resonated with their target audience of younger men who wanted a cheaper shave. It was only a small part of an already creative advert, but it worked, and was made even more funny and relatable by the company’s charismatic founder.

In 2015 Paddy Power managed to get the ASA to clear its advert telling Sepp Blatter to ‘just f**k off already’. The betting company’s argument was that their ad reflected the “overwhelming sentiment” felt by fans that Blatter should resign. The bookmaker’s strapline is ‘we hear you’ for a reason.

Paddy Power went for shock-value, Dollar Shave Club for humour, but they both used language that they knew their target market would relate to. Resonance is a hugely important factor for both brands and dropping the f-bomb was an effective way for the adverts to achieve that connection. 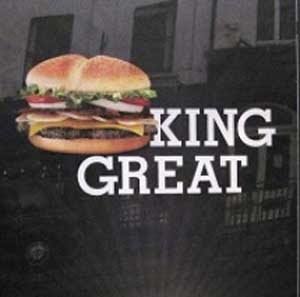 If you’re swearing in your marketing content, it’s because you’ve got the confidence to deal with the fallout. One of my favourite examples is Burger King’s ‘King Great’ campaign from 2010. Not only was it cheeky, it also generated widespread media coverage for the brand as a result of the subsequent ASA investigation. Burger King told the ASA that they were ‘surprised and disappointed’ that their advert had caused offence, which I suspect is untrue in both respects.

Their Youtube video has almost three times as many dislikes as it does likes, but it also has 3.5 million views, and the website has subsequently used similar tactics in many other videos.

Is it right for you?

If you’re confident enough that you want clients to meet you on your own terms, or have a specific target audience that might resonate with a little bit of naughtiness, then it’s worth considering. But if you’re going to go all out like some of the examples above, you’ll need a skin like rhinoceros hide and your hobbies probably include poking beehives with a stick.

While we might be seeing more public figures setting their tongues free on social media, only a select few businesses can get away with the same thing. Be certain that you’re one of them and that the advantages outweigh the risk.